Predictions that a global pandemic will wipe out a large percentage of the population is regarded as a genuine threat. And it was recently reported that an outbreak of a drug-resistant infection could kill 80,000 people in the UK. 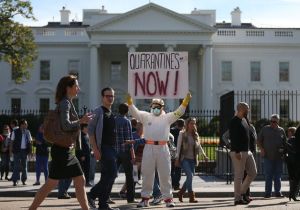 A man protests for the mandatory quarantine of everyone that has returned from Ebola affected countries in front of the White House in Washington, D.C., on Oct.24, 2014. Photographer: Mark Wilson/Getty Images.

In terms of a threat that has just passed, if we think back to September of last year, at the peak of the Ebola outbreak. Conversations about the virus on Twitter started to increase. Due to the accumulation of news reports and sensationalised headlines, similar to the one above.

The actual threat, however, as opposed to the perceived public threat, remained low. Fear and hysteria may not allow people to think, or act logically during an outbreak. So, it is crucial to have an awareness of how people are communicating about an infectious disease. Using real-time data from Twitter it is possible for researchers to gauge public opinion on infectious disease outbreaks.

Twitter feasibly offers researchers millions of views on an outbreak that are available in real-time.  This allows the examination of how a subset of the population may react to an infectious disease outbreak. There is ongoing research on why people may have negative views towards vaccines, for example, as this could affect the spread of a disease. 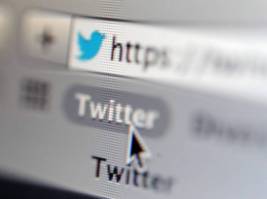 Gauging public opinion at the precise time of an outbreak may not be feasible using traditional methods; as designing a survey or questionnaire is an expensive, and time-consuming process. Though, most research suggests that data from Twitter is best used in combination with traditional methods rather than as a substitute. Especially for research that predicts the occurrence of an infectious disease.

When these figures are compared to Facebook, Twitter does not stack-up well, as 71% of adult internet users are on Facebook; 58% of the entire population. And 65% of Facebook users are 65 and over. Those who tweet about outbreaks may be overrepresented in relation to the national offline population, but these people may be under-represented in survey data.

It is also difficult to obtain Twitter data as Twitter only provides a sample of data to researchers. And obtaining full Twitter data can be quite costly for small to medium sized research groups. There are also issues that arise surrounding spam on the platform, and developing methods of filtering out useful content can be quite challenging.

Current research on infectious disease outbreaks suggests that Twitter offers a method of understanding what a subset of the population communicate about in real-time. The misconceptions that people may hold, and whether these will be harmful in a public health epidemic or pandemic. 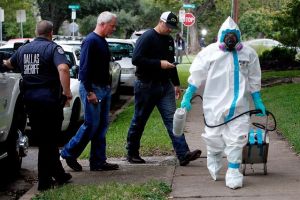 A man dressed in protective hazmat closing leaves after treating a nurse in Texas who is diagnosed with the Ebola virus. Photographer: Mike Stone/Getty Images

Specifically on the Ebola outbreak, early research indicates that there may have been medical misinformation present on the platform regarding vaccines, the role of health officials, and the cure and transmission of Ebola.

My own research involves using Twitter data related to the Ebola outbreak to better understand the content on the platform, how people communicate about Ebola, and to examine the types of information that is present on the platform.

In the present day, research teams are developing better methods in analysing social media data. So this type of research will start to become more sophisticated in the future.