In the previous blog post I examined the unrest in Ferguson using a commercial tool, Visibrain Focus. In this blog post I will outline some Twitter analytics related to the #ILookLikeASuregon hashtag using Visibrain Focus which has access to Twitter’s Firehose i.e., all of the tweets.The results presented here are accurate at the time of writing, and these are from 12 to 1PM UK GMT time on the 27th of August 2015. The network graphs however are over two specific time periods, of the first day of the hashtag, and the of the latest day (27th of August).

Over the past week I have managed to speak to quite a lot of the Twitter users behind the hashtag, even finding myself in a 6-way conference call with Surgeons across continents. There was a lot of passion and excitement as I could tell that this was a hashtag that meant a lot to them. I also had the opportunity to interview Heather Logghe, MD whom provided some insight into how the hashtag came about.

In total, at the time of writing, over the last 30 days there have been at least 28,337 tweets by 6,005 users, with 89,936,713 impressions i.e., the number of times users have seen the tweets. 5,878 (22%) of the tweets are original, 22,459 are retweets (79%). This retweet percentage is quite high. The users behind the campaign have indicated that they look to retweet any mentions of the hashtag, this may be one reason for why there is a high retweet ratio. Also interesting here is that 23,532 links have been shared.

Figure 1 – Timeline of tweets related to the #ILookLikeASuregon hashtag

Figure 1 is a time series graph going back in time 30 days from the date this blog post was written. As mentioned previously, the awareness campaign began on the 5th of August by Heather Logghe, MD. The largest peak occurred on the 12th of August where at least 2,221 tweets were posted.

Figure 2 – World Map of tweets related to the #ILookLikeASuregon hashtag

Figure 2 is a map that plots user locations related to #ILookLikeASuregon using data provided within a users bio. However, this map only displays instances of the keyword where users have used the English language hashtag #ILookLikeASuregon, rather than say a European or Asian alternative.

Figure 3 is a word cloud of hashtags that are present within the tweets. The most frequently used hashtags alongside #ILookLikeASuregon include, #surgtweeting, #diversitymatters, and #challengestereotypes. Many of the hashtags are related to challenging gender stereotypes, which is not surprising considering the aim of the campaign.

Figure 4 – Top expressions within tweets related to the #ILookLikeASuregon hashtag 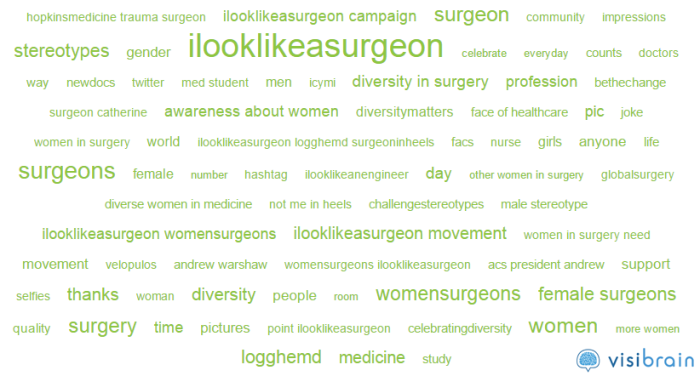 Figure 5 displays the most frequently mentioned user-handles which include @WomenSurgeons, @LoggheMD, and @DrKathy whom are among the users that helped raise the profile of the campaign. 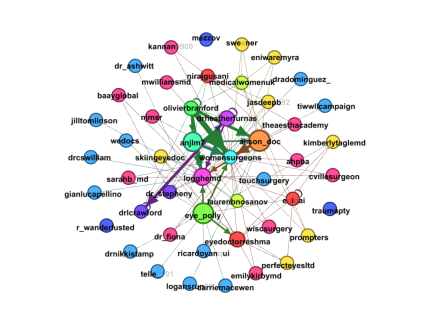 This is a network graph created in Gephi using data obtained from Visibrain Focus from 06 Aug 2015 00:00 to 06 Aug 2015 23:00 and the nodes are ranked by the betweenness centrality algorithm using the Fruchterman Reingold layout. Verbal consent was obtained from this community before the analysis was conducted.

This is a network graph created in Gephi using data obtained from Visibrain Focus from 27 Aug 2015 00:00 to 28 Aug 2015 23:00 and the nodes are ranked by the betweenness centrality algorithm using the Fruchterman Reingold layout.

What figures 6 and 7 demonstrate is that compared to the very beginning (06 August) to fairly recently (27 August) there is an increase of users tweeting with the hashtag, demonstrating that the community has grown significantly.

Massive thank you to Heather Logghe, MD for letting me talk to her, and thanks also all of the other surgeons that were on the conference call I mentioned earlier in the post. Thanks also to Mimi Poinsett, MD for suggesting to analyse the #ILookLikeASuregon hashtag. Massive thanks as always to the lovely Georgina Parsons from Visibrain Focus. This is a link to the platform for anyone interested in seeing what it is all about.