Earlier this week I had the pleasure of hosting a debate at Sheffield Hallam University for charity, a part of 24 hours of debate. The topic of debate I selected was to look at whether social media had been a positive or negative invention. The attendees were mostly undergraduate students, so I was really interested to get their thoughts on this topic. 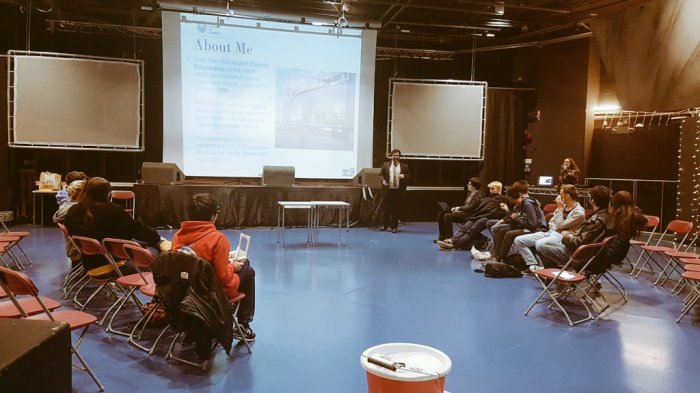 Before kicking off the debate I broke down the current usage of social media such as:

• Of an estimated global population of 7.524 billion – there are 3.028 billion total social media users (37% of the total population).
• That the average mobile phone user spends 2 hours on their phone a day, and touches their phone 2,617 times a day.

In order to have an informed debate I outlined some benefits of social media such as:

• Ability to Connect: we now have the ability to connect with one another from across the world.

• Used in Education: across academia social media is used for teaching and for scholarly communication.

• Marketing: social media has created a number of jobs in a marketing context, and helped small business thrive.

• Politics and Political Change: social media has been credited as being influential during political uprisings.

• Awareness: it is possible to rapidly raise awareness for causes. We can think of the Ice bucket challenge as an example of how social media can be used to raise awareness.

• Emergency and Crisis Situations: in times of crisis data from social media platforms can be leveraged, and this has the potential to save lives.

I also considered some of the limitations of social media such as:

• Cyberbullying / Mental Health: there is the issue of virtual bullying, and potential negative mental health among users.

• Hacking: there are a number of cases where identity theft has occurred, and this has had a disastrous effect on people’s lives. Private photographs can also be stolen.

• Addiction: social media platforms are designed to be addictive, and there may be people who are addicted to the platforms without knowing.

• Unknown effects: there could also be a number of unknown consequences of using social media platforms that we are not currently aware of.

After providing an overview of a number of strengthens and limitations I then looked to consider some questions to be debated which were as followed:

• Do the benefits of social media outweigh the limitations?

In the discussion some thought that the benefits of social media did outweigh the limitations whereas others thought the opposite. Overall, however, there was agreement that there were more benefits that social media platforms offered. Particularly in the ability to connect with one another, create events, and socialise. Though this answer could reflect the views of the audience discussing the topic i.e., undergraduate students.

There appeared to be strong agreement that social media had made younger generations less social. Discussion would then turn to whether it is the role of parents to ensure children were not spending too much time on social media. This then lead on to discussions around the digital divide and how parents may not fully understand the risks of these platforms themselves to be able to keep on top of things.

• Has social media had a positive or negative effect on society?

There was disagreement but the overall consensus was that social media platforms were here to stay. Therefore, the delegates argued that there should be more regulation and guidance for children who may be using these platforms. There were also sentiments expressed by delegates noting that we probably do not know all of the effects social media has had among society.

• What effect have social media had on our mental health?

There was agreement that social media platforms had the potential to cause negative mental health among users. An example was provided of a case of private photographs of a teenager being spread around social media without their consent and the damage that this can cause. Some argued that the challenges posed by social media have always existed in society. Others argued that although this may be the case social media has increased the speed in which information can be spread.

• Have social media companies unfairly exploited our desire to connect with one another?

• Is social media going to change how people live their lives e.g., a comment made when young and naïve can come back to haunt.

There was disagreement among the delegates and one delegate suggested that comments made after a certain age e.g., 16 should be public knowledge for certain professions such as politics. However, this was not a popular view. Most thought that it would not be fair to judge someone for comments that they might make when they are young. The discussion then revolved around how it would be possible to educate younger generations more.

Overall it was an interesting discussion and a range of opinions were discussed. It appeared that the consensus was that social media, on the whole, had more good elements but that care was needed by younger generation using the platforms.

One thought on “Social Media: A Force for Good or Evil?”