This post is based on my 2018 journal article for Online Information Review titled ‘Social media analytics: analysis and visualisation of news diffusion using NodeXL’ .

In this paper I wrote that

“One well-known case of news emerging through Twitter before traditional media outlet was the death of Osama Bin Laden which was leaked on the platform (Hu et al., 2012). Moreover, Hu et al (2012) noted that one of the reasons for Twitter users to become convinced of this news was because the users who were posting the news appeared to be journalists and politicians i.e., reputable individuals. Twitter also has potential for citizen journalism because most smartphones are now able to capture an image on their device and have it uploaded to Twitter in under 45 seconds (Murthy, 2011). An iconic example of this is a passenger on the Midtown Ferry whom photographed a downed U.S Airways jet floating in the Hudson river in 2009 prior to the mainstream media even arriving to the scene  (Murthy, 2011). These cases highlight the power of Twitter in the rapid cascading and diffusing information during emerging news events. ” (Ahmed, 2018 p3)

In the passage above I noted the role of Twitter as a tool for breaking news stories and citizen journalism. It is also important to note that Twitter is also used by politicians and journalists with particular affiliations to try and shape public discourse.

In the paper I argued that better tools and methods are required to be able to critically analyse, visualize and understand the swarm of content being generated by social media platforms such as Twitter. I noted that:

“However, it can be argued that Twitter has been poorly mapped and understood for its network properties by news media. This is because although it is possible to visualise the structure of a conversation on Twitter and to identify prominent users and the overall structure of the conversation in order to garner the situational awareness of an emerging news story this aspect of Twitter is seldom reported on by news media.” (Ahmed, 2018 p.9)

The tool that I outlined which can be used by journalists to map and visualise social media is known as NodeXL. In the paper I noted that:

“NodeXL allows end-users to generate network visualisations from a range of data sources and one such source is Twitter. In the case of Twitter NodeXL can additionally generate a number of metrics associated with the graphs such as:

I then went on to provide a table for how NodeXL could be used by journalists.

In the paper I provide the example of #MacronLeaks, however, below I have provided a network visualization of the keyword ‘Theresa May’.

Figure 1 – Network visualization of Theresa May 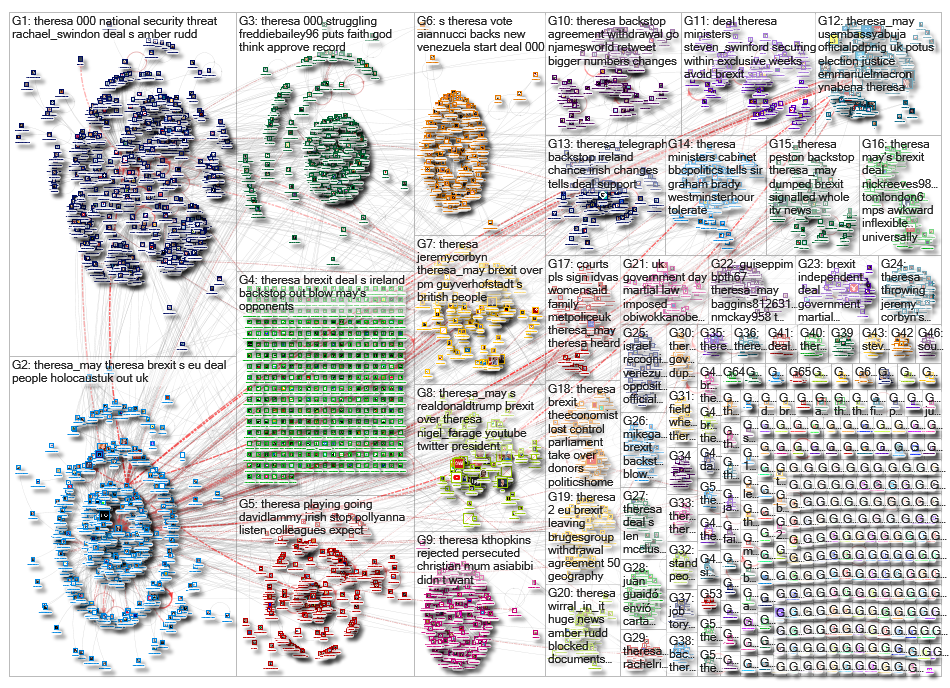 The above network graph resembles a number of different shapes and we can interpret them drawing on guidance from Smith et al (2014) which outlines different types of network structures.

We can then work through the full analytics (found here) and begin to complete Table 1 taking on board the guidance provided. For instance, to understand some of the main narratives we can take a look at most shared URLs, domains, and hashtags in NodeXL. This will then provide insight into some of the key narratives related to Theresa May on Twitter.

My Tweets
Join 102 other subscribers